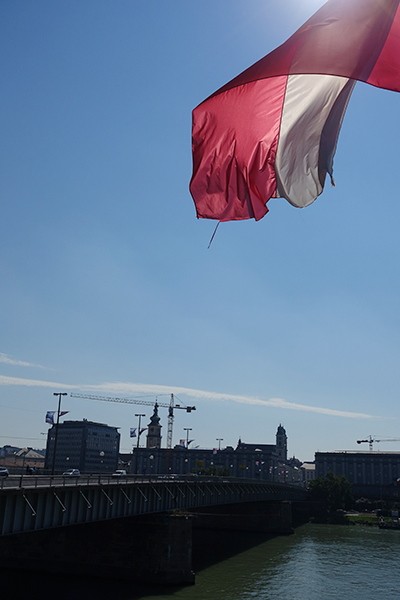 Interactive Audio Installation: In cooperation with the Ars Electronica
Center Linz and the company Sumetzberger Vienna

Invited competition: Monument for Active Freedom from Violence in Linz Urfahr. Not realized

Between the New City Hall of Linz and the buildings from the National-Socialist era, the Nibelungen Bridge and the bridgehead building on the other side of the Danube, a monument is to be erected with a maximum surface of nine square meters. Foundation or anchoring in the ground are not possible.The maximum weight can be no more than 500 kg. Various access roads must not be blocked.

The planned site for the monument is highly charged with historical experiences that have an impact up to the increasingly insecure present. Especially the view of the buildings from the Nazi era, occupied today by an institution usually considered a hotbed of disobedience – namely the Art University – prompts me to meet the context with an unexpected reaction: Facing the worst, laugh till you burst. Samuel Beckett. A simultaneity of laughter and violence is not principally impossible. But laughter is, first of all, a gesture, in which tensions are released. It can be consciously trained, which is why it is used in therapies for training de-escalation in conflict situations.

Concept:
The highest of multiple stone basins with plants has a comfortable height for sitting, and its surface is to be emphasized and put to use with a wood covering. Sitting down, contact with the covering, e.g. by traceurs/parkour athletes or skateboarders, and movements nearby activate a speech storage system via sensors: contagious laughter can be heard briefly. Outdoor loudspeakers, installed invisibly in the plant basin between year-round plants with grass, are connected through an existing cable conduit with a programmed speech storage system, which can be installed in an existing service room directly under the location.