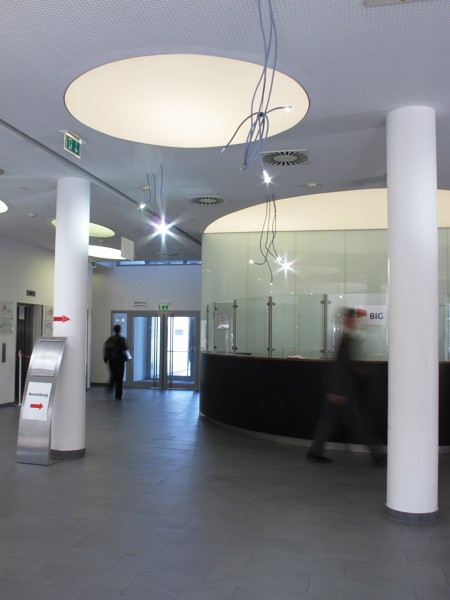 2012, 2014: Technical adaptations according to new materials and solutions.

This project has been the result of an art competition and has been commissioned by Bundesimmobiliengesellschaft (BIG). 0–24 Licht uses solar energy for the direct conduction of sunlight rather than transformed through traditional photovoltaic systems. The installation’s innovative method of sunlight transport relies on a new combination of existing infrastructure system components: A heliostat installed on the roof of Haus der Forschung (House of Research in Vienna) captures natural light and transmits it via systems in place over the entrance to the building, by which the light is fed into fiber optic cables that bring the sunlight into the interior of the building. In the foyer various cables are hanging from the ceiling. "Isn’t the building finished yet? Are they live?" These are questions asked by visitors when they first view the
0–24 Licht installation. The sunlight emerging from the cables can actually be seen and touched. It is a cold light. The transmission by cable of light from the roof occurs instantaneously; if a cloud passes in front of the sun, the light from the cables immediately weakens. As the first known application of sunlight transport using this combination of technical components 0–24 Licht in its current incarnation remains a prototype system for a new generation of sustainable infrastructure rather than a lighting system. It requires further research and experimentation to extend the economic possibilities of any further applications. The prototype has bee developed in 2006 by Bartenbach LichtLabor (Engineering), Lumena Daylight Systems, Switzerland (Heliostat), Parans Daylight AB, Sweden (Sollektor) and is in constant development, most recently with the German company Bavarian Optics