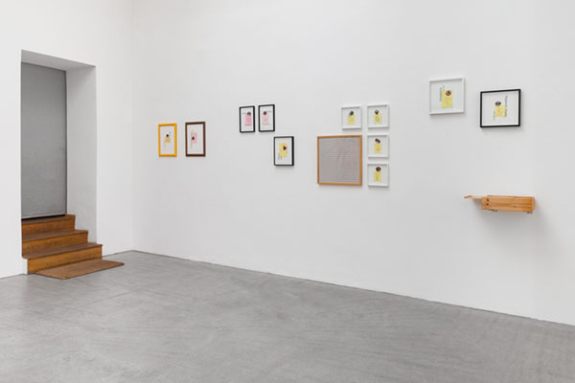 „With the series TWINKS the artist began at a time when in the course of the digital revolution a certain canon for the display of scientific collections was beginning to emerge. Collection holdings were fed into complex informationprocessing systems, such as image databases, by means of naming, indexing and an apparently objective visualisation, and located for an incalculable period of time.

“The collection holdings” that Andrea van der Straeten draws on from her personal stock in TWINKS are the so-called Wäscheblumen [Lingerie Flowers]… They show intimate underwear such as briefs and nylons, just as she had taken them off at the end of a day. Lying on the floor, they seemed to assume the formation of a flower … Andrea van der Straeten cut out these lingerie flowers and assigned them to a certain plant genus – for example dahlias. From a catalogue of plants she then chose names of breeders – such as Bubiköpfchen, Boy O’Boy or Hot Bikini. From scientific textbooks she then drew the outlines of their botanical figure that is typical for the genus on pink or lemon-yellow carbon-copy paper. Here already the density of the growing complex of interwoven reference systems can be guessed. Andrea van der Straeten does not harmonise them, but rather plays them off against each other subversively. Thus the artist uses typography to stage the amusing contrast between the Latin genus name from botanical systematics and the arbitrary breeder’s name …„ (Heidrun Rosenberg, Curator)