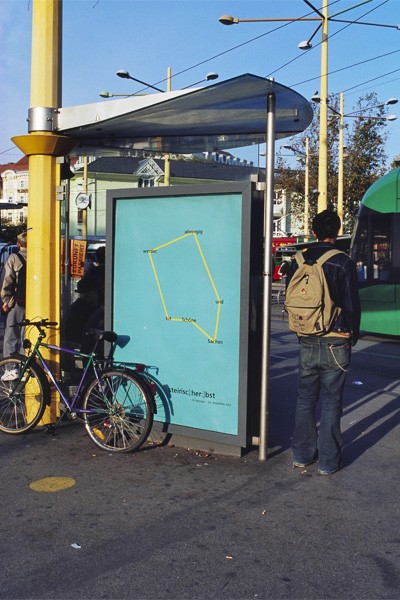 Posters in City-Light display cases, 4 contributions for museum in progress in the Austrian daily newspaper Der Standard, jingles for radio, video projection, postcards, T-Shirt-Edition for performances in the public sphere

Kassiber designed the graphic symbol for the 2002 steirischer herbst festival, which at first glance could just as easily be a constellation, a tram ticket or a catenation of various venues; however, on closer examination it also revealed itself to be an instrument for decoding hidden messages which could be discovered as smuggled foreign bodies in larger texts of political speeches found on the internet.
This principle continued in other media and in coordination with various artists who were invited to participate in this project. Robert Buchschwenter and Mona Hahn remixed historical speeches from radio archives into a jingle for radio, based on the analysis of subliminal techniques the artist group a.s.a.p. developed a video projection for the façade of the herbstbar, and Short Message Shirts (organisation: Daniel Hafner) transformed clothing into an instrument of collective text creation with the aim of "defining the reading not only as a gesture of the eye but of the body generally", in such a way as to free the binomial categorisation production – consumption, which Michel de Certeau equates with writing – reading from it’s classification as active and passive.

Disclosure of the Code
»The Kassiber is the classical means of secret communication and is generally regarded as a message from one sphere to another, whereby at the transfer there is surveillance and censorship which has to be evaded. Thus by definition either the recipient or the sender of a kassiber is limited in his freedom. However, art is free anyway and is not subject to censorship, so why does it need a kassiber? Art may be free but public space is not, and the Kassiber project is conscious of this dichotomy. Public space is increasingly becoming a sealed surface. Its interruptions and empty spaces are regulated and given over to becoming the bearers of (mostly commercial) messages. To the extent that this development has seized space, the places for critical-artistic practice in public and media space have also been reduced, having been done away with or having become prohibitively expensive. On 50,000 postcards and other advertising media, the artist distributes found texts from the field of social Darwinist rhetoric and at the same time presents us with their escalation, reinterpretation and critic. The Kassiber project uses the festival advertising as a Trojan horse to transcend the border, marked out by commercial and political
interests, between the autonomous interior space of an art event and a larger public.«
(Martin Fritz, curator and project consultant)

Prolonged contact with warm fingertips makes the black temperature sensitive ink disappear and reveals the texts of neo-liberal politicians whose messages were unintended: "Verhaltet euch ruhig und spart
schneller" (Stay calm and save faster); "Werdet abwegig und tut schöne Sachen" (Be devious and do something beautiful); "Macht euch fertig und spuckt auf die Kleineren" (Do yourself up and spit on those beneath you) "Seid nicht bunt sondern farbig" (Don’t be colourful, be coloured) …